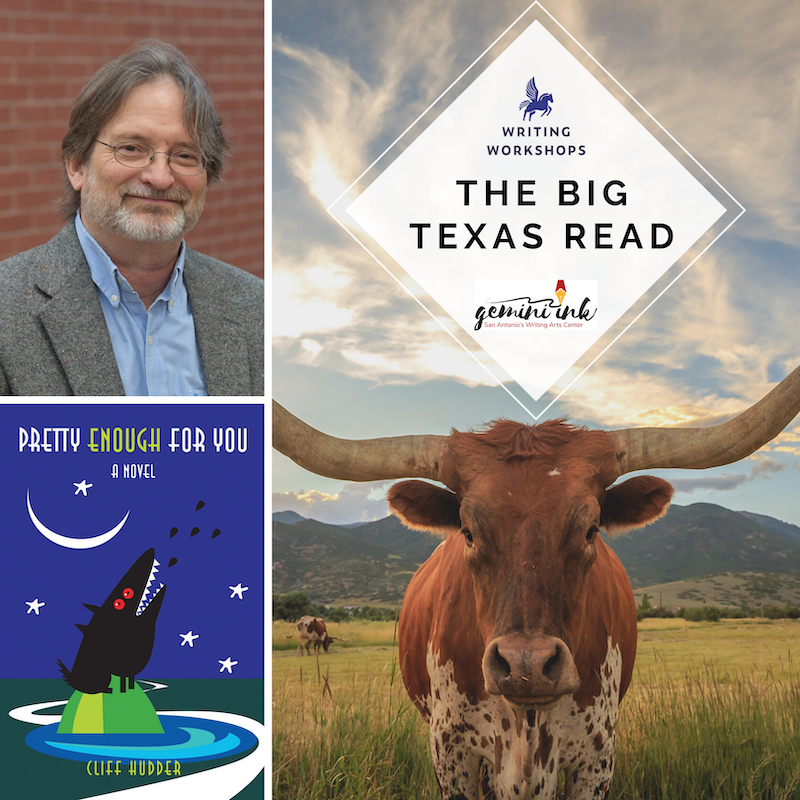 UP NEXT: We’re reading and discussing Cliff Hudder‘s novel from Texas Review Press, Pretty Enough for You. This program will be moderated by Tony Diaz.

Ne’er-do-well immigration attorney Harrison Bent can’t imagine why the wealthy and mysterious Maggie Leudecke wants him to solve her eminent domain problem. If he didn’t have an angry wife to placate, an inscrutable stalker to identify, an obsessed girlfriend to escape, and a murder to solve, a successful outcome to the Leudecke case might revive his career, pay for his autistic son’s special school, and–most important of all–help convince his young paralegal, Chloe, that the afternoon she spent with him in a cheap motel wasn’t an error in judgment, but the beginning of something profound. If only he had some clue as to what he was doing . . . .

From the book: I know myself. That’s the good news. That’s also the bad news. For example, I knew I was not equipped to deal with the Leudecke case. I also knew I wouldn’t turn it down or hand it off to somebody better suited. But, seriously, what background did I have in eminent domain? Or with Mexican drug dealers? Or dead Mexican drug dealers? None. And I knew it.

CLIFF HUDDER earned an MFA in Fiction Writing from the University of Houston. His work has received the Barthelme and Michener Awards, the Peden Prize, and the Short Story Award from the Texas Institute of Letters. His novella, Splinterville, won the 2007 Texas Review Fiction Award. He teaches English at Lone Star College-Montgomery and lives in Conroe, Texas.