Zoom, free and open to the public

Join two groundbreaking contemporary authors, internationally bestselling author David Shields and National Book Award Finalist John Phillip Santos, for a free Zoom author talk. Listen in as these two literary powerhouses take on everything from writing during a pandemic to the role of the literary arts on the eve of an election with the soul of America itself on the ballot. Enjoy an intimate literary conversation as these two authors explore how the writing arts can help us all navigate these roller-coaster times. An audience Q&A will be a part of this event.

RSVP at this link–>

David Shields is the internationally bestselling author of twenty-two books, including Reality Hunger (named one of the best books of 2010 by more than thirty publications), The Thing About Life Is That One Day You’ll Be Dead (New York Times bestseller), Black Planet (finalist for the National Book Critics Circle Award), Other People: Takes & Mistakes (NYTBR Editors’ Choice), among other award-winning publications. James Franco’s film adaptation of I Think You’re Totally Wrong: A Quarrel, which Shields co-wrote and co-stars in, was released in 2017. Shields also wrote, produced, and directed Lynch: A History, a documentary film about Marshawn Lynch’s use of silence, echo, and mimicry as key tools of resistance with rave reviews in the New Yorker, the Nation, and dozens of other publications. His books have been translated into two dozen languages. His website is davidshields.com. 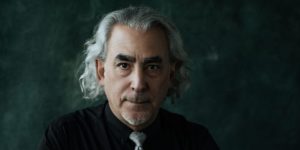 John Phillip Santos is a writer, journalist and documentary filmmaker from San Antonio, Texas.  His two memoirs, Places Left Unfinished at the Time of Creation (a National Book Award Finalist) and The Farthest Home is in an Empire of Fire, together tell the ancestral stories of his mother and father’s families, an American origin story of the centuries-long migrations that emerged out of Spain, Mexico, and the lands that became South Texas. His book of poems is Songs Older Than Any Known Singer. As an Emmy-nominated television producer, he has produced more than 40 broadcast documentaries and news programs on cultural themes in sixteen countries for CBS and PBS. His journalism and commentary has appeared in the New York Times, the Los Angeles Times, the San Antonio Express-News, Texas Monthly and other publications in the U.S., Mexico and Europe. Since 2010, he has been University Distinguished Scholar in Mestizo Cultural Studies, teaching in the Honors College at the University of Texas-San Antonio. In 2017, he was awarded the Texas Medal for the Arts in Literature.