Up Next: We’re reading and discussing poet Mike Soto‘s collection A Grave is Given Supper (Deep Vellum, 2020), a Narco-Acid Western in profound poetic form, using themes from the ongoing drug war taking place in a fictional U.S./Mexico border town.

This session will be moderated by Deep Vellum poetry editor Sebastián H. Páramo.

ABOUT A GRAVE IS GIVEN SUPPER 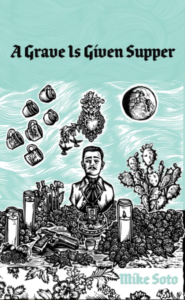 A Narco-Acid Western told in a series of interlinked poems, Soto’s striking debut collection follows the converging paths of two protagonists through El Sumidero, a fictional US/Mexico border town where an ongoing drug war is raging. The surreal verse of Soto’s poems portrays a bleak political climate as it coincides with the rituals of love & loss, culture & spirituality, & the quest for a better life at all costs. Following the narrative arc of Alejandro Jodorowsky’s classic cult film, El Topo, A Grave is Given Supper builds a world saturated with a mystical aura that describes the finite tensions & complicated desires of lives taking place in the borderland.

ABOUT MIKE SOTO
Mike Soto is a first-generation Mexican American, raised in East Dallas and in a small town in Michoacán. He is the author of the chapbooks Beyond the Shadow’s Ink, and most recently Dallas Spleen (Deep Vellum). He received his MFA from Sarah Lawrence College, & was awarded the James Merrill Poetry Fellowship by Vermont Studio Center in 2019. A Grave Is Given Supper is his debut collection of poetry.
ABOUT SEBASTIAN H. PARAMO

Sebastián H. Páramo is a CantoMundo Fellow and a former Dobie Paisano Fellow. His work has appeared in or is forthcoming in The Los Angeles Review, Southern Indiana Review, Southeast Review, The Cortland Review, Bennington Review, and elsewhere. He is the founding editor of The Boiler and Poetry Editor for Deep Vellum. He is the recipient of grants and fellowships from the Sewanee Writers’ Conference, Bread Loaf Writers’ Conference, and the Vermont Studio Center. He is a Visiting Assistant Professor of English at Austin College in Sherman, Texas. His manuscript, Portrait of Us Burning, has been a finalist for the Prairie Schooner Book Prize, the X.J. Kennedy Poetry Prize, and the Hudson Prize.