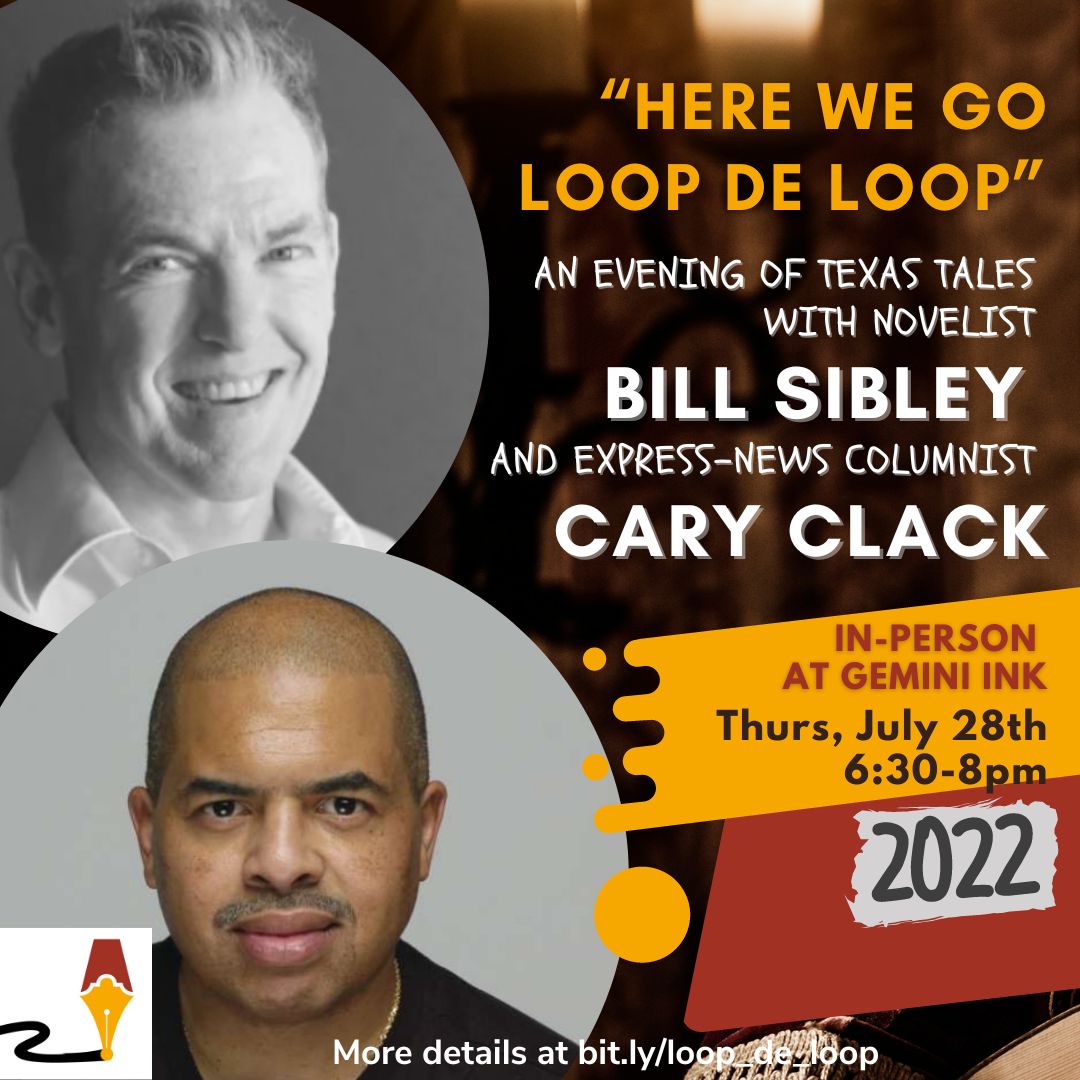 Reviewers of Bill Sibley’s recent novel call it a “delightfully snarky and rollicking romp of a satire,” and claim Sibley “crams this quirky Texas epic with humor, contemporary issues, and oddball characters.”

Bill will be joined by award-winning journalist Cary Clack, who blends “cleverly worded, poignant, well-thought-out” ideas with humor and “consistently offers his readers a new perspective” through his weekly columns and editorial insight.

You will not want to miss this evening of tall tales and laughable, penetrating truths!

Award-winning Bill Sibley is a fifth-generation Texas rancher and a versatile writer whose work has spanned from the likes of writing dialogue for television’s Guiding Light to serving as a contributing editor at Andy Warhol’s Interview Magazine, to seeing his plays produced off-Broadway and regionally. Sibley is the author of a dozen screenplays, nine stage plays, and three novels (Any Kind of Luck, Sighs Too Deep For Words, and Here We Go Loop De Loop).

Sibley’s previous works have won the National Indie Excellence Book Award and USA Best Book Award while succeeding as a finalist in the Lambda Literary Award, Foreword Reviews Book of the Year, and more. Sibley currently is the Secretary of the Texas Institute of Letters, as well as a member of The Dramatist Guild and the Writers Guild of America. He lives in San Antonio. For more, visit www.williamjacksibley.com.

Cary Clack was born and raised in San Antonio and graduated from St. Mary’s University with a B.A. in Political Science. In 1995, he became the first Black metro columnist in San Antonio Express-News history and later became the paper’s first Black Editorial Board member. A collection of his columns, Clowns and Rats Scare Me, was published in 2009 by Trinity University Press. He was inducted into Texas Institute of Letters in 2017. He has won various journalism awards, most recently the 2022 Texas Associated Press Managing Editors’ Award for Editorial Writing. Currently, he is completing the first anthology of Black Texas Writers forthcoming from Texas A&M University Press as part of the Wittliff Collection.