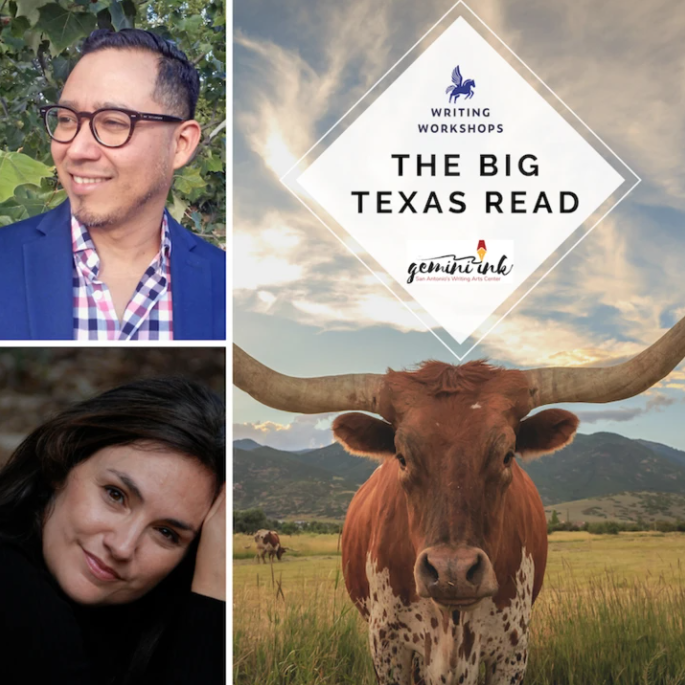 We’re chatting with Octavio Quintanilla discussing his collection of poems If I Go Missing, and his chapbook of frontextos, Poem Machine, with guest moderator Natalia Treviño. 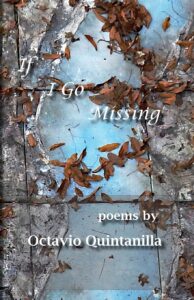 An astonishing debut, If I Go Missing is timely, fearless, and necessary. In these poems, Octavio Quintanilla measures displacement with language and grapples with the longing to begin anew, to return to what was left unsaid, undone. Redemption is not always possible in the geography of these poems, but there is always a sense of hope. And by this pulse we are guided, the poet’s unmistakable voice that, finally, clears the way so we may find our bearing.

Octavio Quintanilla is the author of the poetry collection, If I Go Missing (Slough Press, 2014), and served as the 2018-2020 Poet Laureate of San Antonio, TX.  His poetry, fiction, translations, and photography have appeared, or are forthcoming, in journals such as Salamander, RHINO, Alaska Quarterly Review, Pilgrimage, Green Mountains Review, Southwestern American Literature, The Texas Observer, Existere: A Journal of Art & Literature, and elsewhere. His Frontextos (visual poems) have been published in Poetry Northwest, Gold Wake Live, Newfound, Chachalaca Review, Chair Poetry Evenings, Red Wedge, The Museum of Americana, About Place Journal, The American Journal of Poetry, The Windward Review, Tapestry, Twisted Vine Literary Arts Journal, & The Langdon Review of the Arts in Texas.

Octavio’s visual work has been exhibited at the Southwest School of Art, Presa House Gallery, Equinox Gallery, UTRGV-Brownsville, the Weslaco Museum, Aanna Reyes Gallery in San Antonio, TX, Our Lady of the Lake University, AllState Almaguer art space in Mission, El Centro Cultural Hispano de San Marcos, The Walker’s Gallery in San Marcos, TX, and in the Emma S. Barrientos Mexican American Cultural Center / Black Box Theater in Austin, TX.  He holds a Ph.D. from the University of North Texas and is the regional editor for Texas Books in Review and poetry editor for The Journal of Latina Critical Feminism & for Voices de la Luna: A Quarterly Literature & Arts Magazine.  Octavio teaches Literature and Creative Writing in the M.A./M.F.A. program at Our Lady of the Lake University in San Antonio, Texas.

Born in Mexico, Natalia Treviño is the author of VirginX (Finishing Line Press) and Lavando la Dirty Laundry (Mongrel Empire Press), which has been translated to Albanian and Macedonian and published in Macedonia (2021). Her work has won several awards including the Alfredo Cisneros del Moral Award, the Dorothy Sargent Rosenberg Poetry Prize, the Literary Award from the Artist Foundation of San Antonio, the Menada Literary Award from Macedonia and several others. Natalia is a graduate of the University of Texas at San Antonio and the University of Nebraska at Omaha. She works as a Professor of English and as an affiliate Mexican American studies faculty member at Northwest Vista College. Her publications appear in Open Plaza, Plume, The Southern Poetry Anthology, Bordersenses, Borderlands Texas Poetry Review, Sugar House Review, The Taos Journal of Poetry and Art, and several others. Her work also appears in several anthologies including Mirrors Beneath the Earth (Curbstone Press), Contra: Texas Poets Speak Out (Flowersong Press), Puro Chicanx Writers of the 21st Century (Cutthroat Press), and most recently in Chamisa: A Journal of Literary, Performance, and Visual Arts of the Great Southwest (University of New Mexico).