The Writer’s Desk with Tori Pool

My first writing desk was probably made from plastic and read “Fisher-Price.” It was definitely a hand me down from some relative. My desk now was meant to be a drawing table though I don’t draw aside from doodling in margins. It’s stained from paint, and yet another hand me down. In fact, even the chair is repurposed from an old kitchen table we got at Goodwill. The desks are similar because they have a bit of history yet different because of my size. After all, I’ve outgrown desks made out of plastic.

Has your preferred place to write changed over the years?

I enjoy writing in different places. Sometimes, it’s at a bustling mic, basement stairs, couch, bed, or breakfast table underneath the afternoon sun from my skylights. I like to write in nature, but sometimes the sun is just too bright, almost demanding my attention. When it’s something important like editing or work, my desk is where I’m the most productive.

Do you have any habits or routines that you follow before writing?

Before I sit down to write, I have to have something hot and something cold to drink. It sounds weird, but hot green tea or hot coffee, and sometimes an iced coffee and iced Topo Chico are my habit drinks to have next to my electronics (which sounds dangerous).

What is your secret talent? Does it ever pop up in your writing?

I can make a joke about almost anything. It might be a completely wrong opportunity, but it’s my coping mechanism, and I like it. Also, it’s a gift from my family; when together, we say the most inappropriately timed jokes. It for sure manifests in my writing, sometimes unfavorably.

What’s a book or movie that you can watch over and over again and not get tired of?

Charlaine Harris—Sookie Stackhouse series is so dang entertaining that I enjoy rereading it in bursts every few years. I’m a massive fan of anything Doug Stanhope writes because it’s deliciously bad and raw. Kitchen Confidential is a good one too, and Bourdain was just a gifted storyteller.

As far as movies, a few that come to mind are Shawshank Redemption, Happy Gilmore, Eternal Sunshine of the Spotless Mind, and Goodfellas. Of course, there are MANY others because film is vital to me, but those are the significant ones. The two series that I binge every year without fail are Band of Brothers and Six Feet Under. I know the Band of Brothers thing is weird, but I’m in love with Easy Company, and it’s just incredibly well done. Of course, it doesn’t hurt that the entire cast is easy on the eyes. As for Six Feet Under, it’s the only series that has ever given me closure because, in the last episode, all of the character’s deaths are revealed.

Is there anything that you’ve been listening to lately—an interesting podcast, a song list, or album?

You guys made me make you a playlist! So here are some songs I can’t stop listening to right now.

What theme or symbol often emerges in your work? Why are you drawn to this theme/symbol?

I’m constantly drawn to water imagery. It makes me think of being small and dependent on my mom. Water is strong; it shapes rocks, moves sediment, and for me, it’s where I’ve felt the most unstable. Pulling the images of tension and uncertainty has helped me a great deal in writing about my mother, who passed. The pull, current, or even its overall massive form makes me think of how she served as an anchor in more ways than one.

Do you like things to be carefully planned out, or do you prefer to just go with the flow? Does this also apply to how you lay out a story?

When it comes to story writing, screenplay writing, or joke writing, I have to have a plan and loads of prewriting. When I write fiction or nonfiction, I tend to free-write and allow myself to figure out what I want to say. Sometimes it becomes aimless, but other times, I have to uncover something buried with lots of editing and revising. Like joke writing, I always overwrite, then whittle it down as much as possible until the point is revealed.

What habit do you have now that you wish you had started much earlier?

It’s been essential to me as of late to try and like myself. It reads kind of weird as I type the words, but every day, I try to tire my body out, write for my brain, and laugh at the small stuff (and big stuff). I’m the kind of person that has spent most of her life faking confidence, whether on stage or in person but never really addressed deep-rooted self-esteem issues. Now, I genuinely want to like myself, so I try to do just that every day. I’m not always successful, but I’m for sure getting better.

Which fictional character would be the most boring to meet in real life? Why?

Which words or phrases do you most overuse?

What are some misconceptions about being a writer that you can discredit?

We are not all alcoholics; some of us like marijuana. JKJK.

Not every writer needs a vice, and not every vice needs a writer.

Does good writing result from best practices, magic, or a bit of both?

I think good writing pulls you in and makes you see a part of yourself, and that’s pretty magical.

What is your next project?

I’m working on building an hour of standup I genuinely like, launching a monthly podcast with one of my best friends, and starting to edit/revise a novel I wrote in quarantine. I’m also writing a series about Texas twins that moonlight as serial killers.

If people want to learn more about your work, where should they go?

They should definitely visit toripool.com and follow me on social media. However, I will warn you that I’m pretty standard on FB, post too much on Instagram stories, and am the silliest on Twitter. 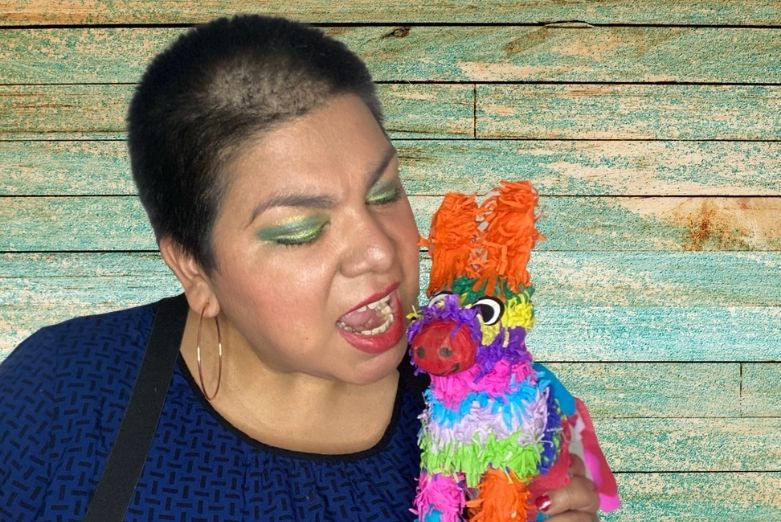 Tori Pool is a former educator turned comedian who has been twice nominated for Best Standup by The San Antonio Current. A comedy club favorite, Pool has opened for Mo Amer, Drew Carey, and Tom Green! She’s been featured on Texas Public Radio’s Worth Repeating and co-wrote a popular card game, Latino Card Revoked. Recently rejected by Last Week Tonight, Tori spends most Fridays at Blind Tiger Comedy Club, where she writes and performs weekly unless she’s booked elsewhere. She is the host of the podcast “ToxicActually.”

The Writer’s Desk with Octavio Quintanilla

The Writer’s Desk with Octavio Quintanilla